skip to main | skip to sidebar

I Iove me some comic books. Superheroes, humor, alternative, horror whatever.

anytime soon. With that said, today's post is the first of what will

no doubt be many comic-book-related posts on this blog (which I know,

On my flight back from my recent trip to Austin, Texas for SXSW 2011

to fill. So inbetween watching episodes of LOUIE, playing EARTHBOUND

on my PSP and listening to GHOSTFACE KILLAH, JAY ELECTRONICA,

In said pile I had the latest issues of GUARDING THE GLOBE,

some graphic novels: Jason McNamara's THE MARTIAN CONFEDERACY http://www.themartianconfederacy.com/ (purchased in the

artist's hometown of San Francisco during my visit to the legendary 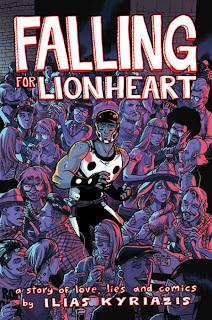 So my buddy Toby mentioned this book to me a few weeks ago. Toby's one of the only people I know who may read

more comics than me, so if he suggests something I'll usually give it a look, as we both

tend to dig (and dislike) the same stuff. I'll be honest though, I'd been putting off reading

FALLING FOR LIONHEART and was a little hesitant to crack the spine.

How come? Well, it's an indie Superhero Romance comic with an emo twist, which as funny as it sounds to the lay-comics reader, I've seen before.

I'm happy to say FALLING FOR LIONHEART featured none of the above.

Let's start with the premise: It's a about a lovesick superhero who

when not fighting superpowered threats to the globe makes his own

Jeffrey Brown-esque emo indie comics. *(If you're not familiar with

Jeffrey Brown, he's basically the top creator in the field of

comics. I'm a fan of his work http://www.jeffreybrowncomics.com/ check out CATS ARE WEIRD & INCREDIBLE

CHANGEBOTS). You don't need to be familiar with Brown's stuff to enjoy

Anyway back to the book - the concept works really well

normal front as a juiced-up american gladiator lookalike who flies

around punching holes in super-robots. He's just a dude looking for love who makes his own comics and

happens to be a superhero during the day.

Now I usually hate reviews that break down the entire story for you, so I'm not going to do that here. Basically what you need to know is that

this superhero (LEO) with a broken heart searches for love while writing his autobiographical comics. His friends are cocky, over-machismoed hetero-male stereotypes

who don't understand his artistic pursuits and the women in his life are also fairly douchey. One day he has a chance encounter with a fellow comics enthusiast and yada yada we've got a story on our hands.

That's as much of a synopsis as I'm gonna give.

The story has some really funny & sharp moments and all the supporting characters are well-defined. Ilias Kyriazis whose work I was previously unfamiliar with

(he worked on some Ghostbusters comics for IDW before this) handles the writing & art chores like a pro. The dialogue

is crisp, original & fun and the art is clean and fluid. Kyriazis has a great sense of storytelling and definitely stands on his own as a cartoonist to watch.

FALLING FOR LIONHEART a try. Your local comic shop should be able to order a copy if they don't currently stock it, or you can get it here: